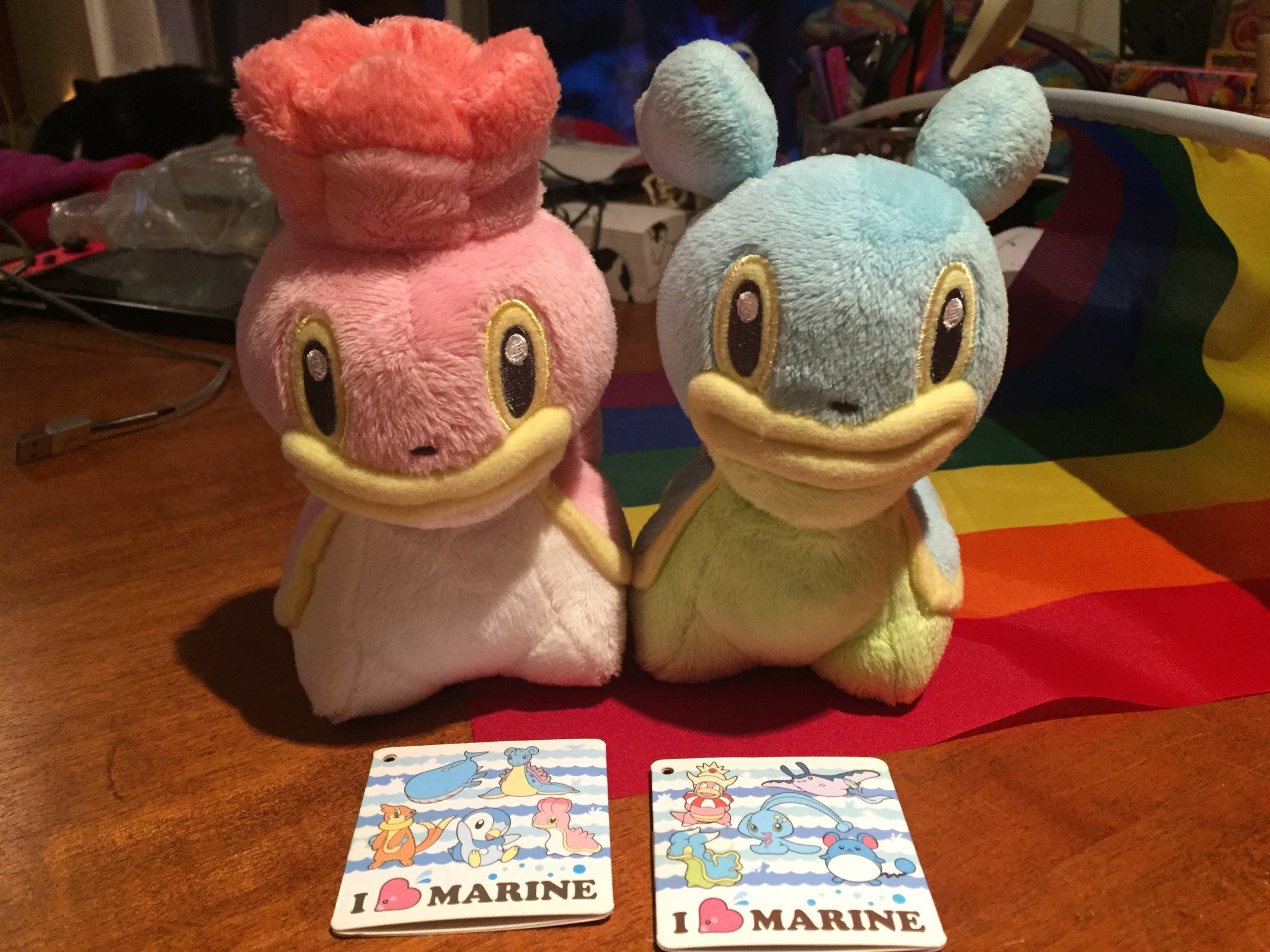 Sweet pastel matching babies! I think the I Love Marine set is amazing, and I'm so glad the Shellos babies were included in it~ Did you know, these were the first Shellos plushes to include their little noses on them? I guess it's not saying much since they only have a total of three plushes at this point, but it's still neat! 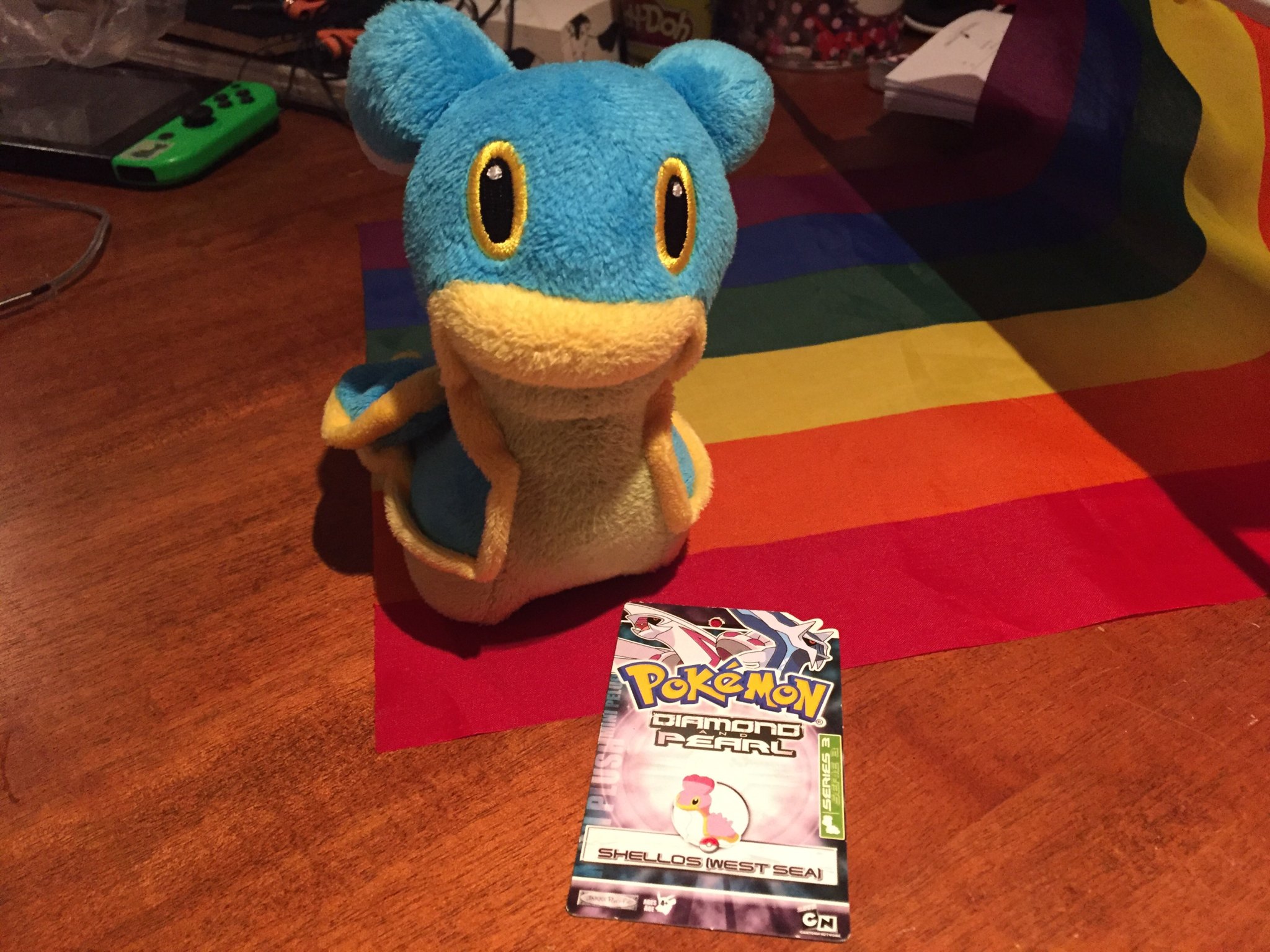 This is a bit of a weird one, isn't it?! The tag and this plush are separate from each other though, they didn't come together! I previously had the West Sea Shellos version of this plush as a kid, but I lost it after my childhood home's basement flooded - all I have left of it is the tag, which I kept in my card binder 💔 The East Sea plush was purchased in mid 2021, but has clearly seen a lot of love in its' life! I love having plushes where their previous owners clearly had a fondness for them.

Some assorted Pokemon Kids figures I've collected over the last little while! The kids figures are actually my favourite line of Pokemon figures to date. I'm still on the lookout for clear versions of all four of these babies - please let me know if you happen to see any of them for sale! 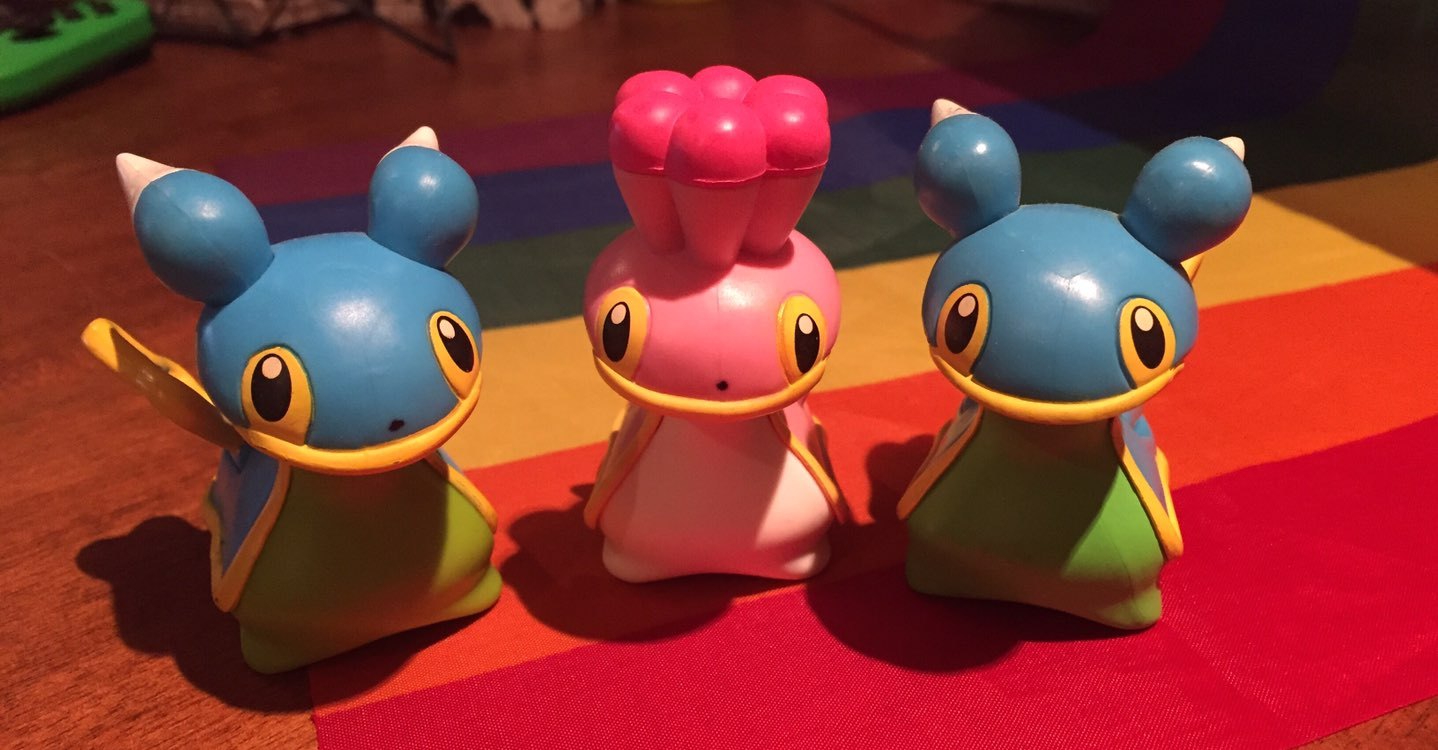 Some secondhand Jakks figures I've picked up! All three of these were childhood toys from their owners, and have varying levels of wear - I love to see it! The ones with the little noses were drawn on by their previous owner as well. I love it though - it's always so weird to me how much Shellos merch forgets about their cute little button noses!

These babies came to me all the way from Japan! These figures were sold alongside beef bowl dishes from the fast food chain restaurant Yoshinoya! It's crazy to me they chose both Gastrodons as options, considering their set consisted of Pokemon like Charizard and Groudon, but I'm so happy they did! Fun fact - they ended up having to temporarily discontinue this promotion at one point because it was TOO popular! I'm sure they were all looking to get their own Gastrodons... 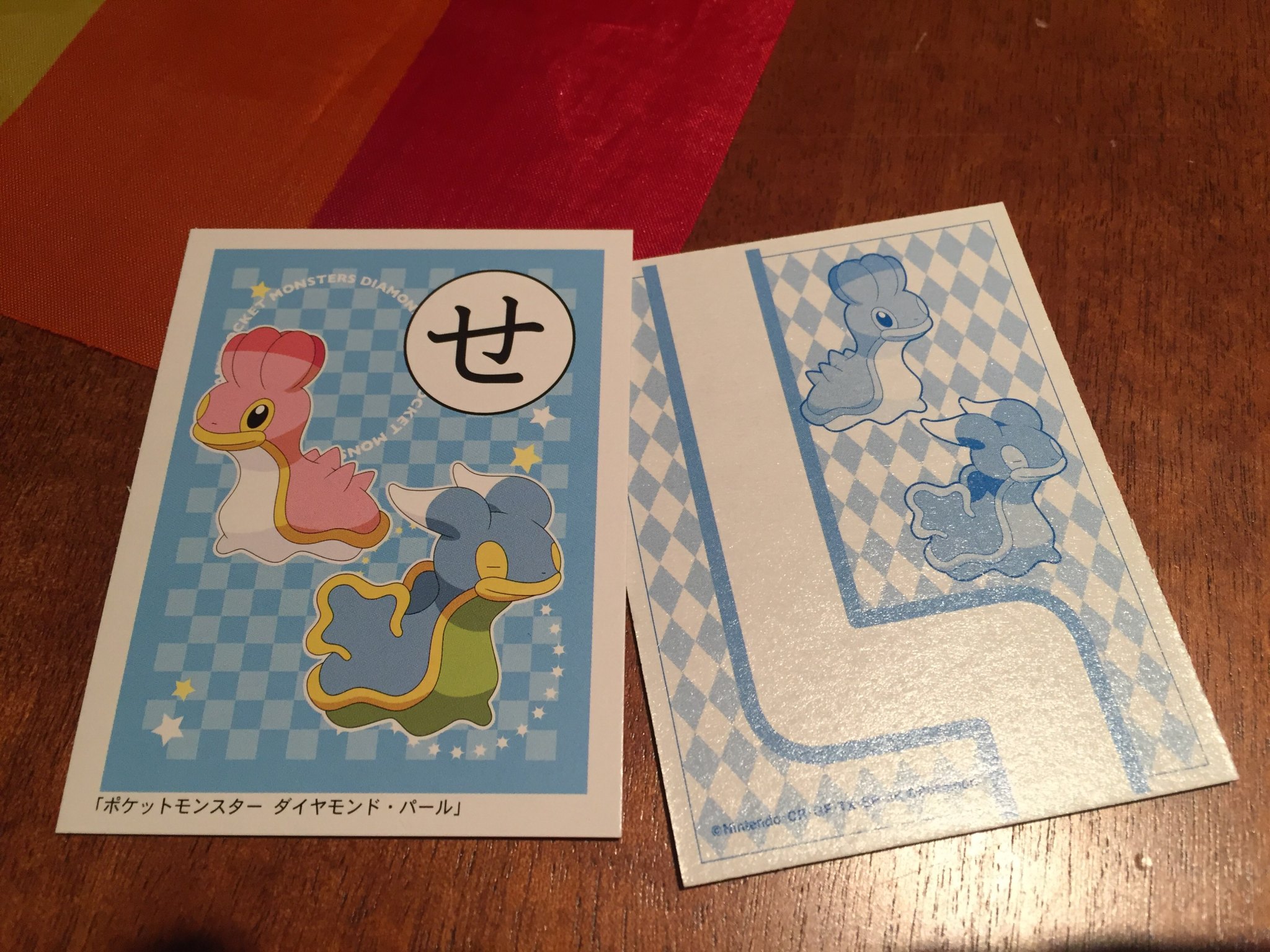 These cards are used to play an old Japanese card game known as Karuta! This game was introduced to Japan from Portugese traders back in the 16th century, and was converted to card format in the 17th century. It's neat to see these sorts of cards still being made, not only because of how old the game is, but also because Nintendo started off as a karuta company back in 1889! 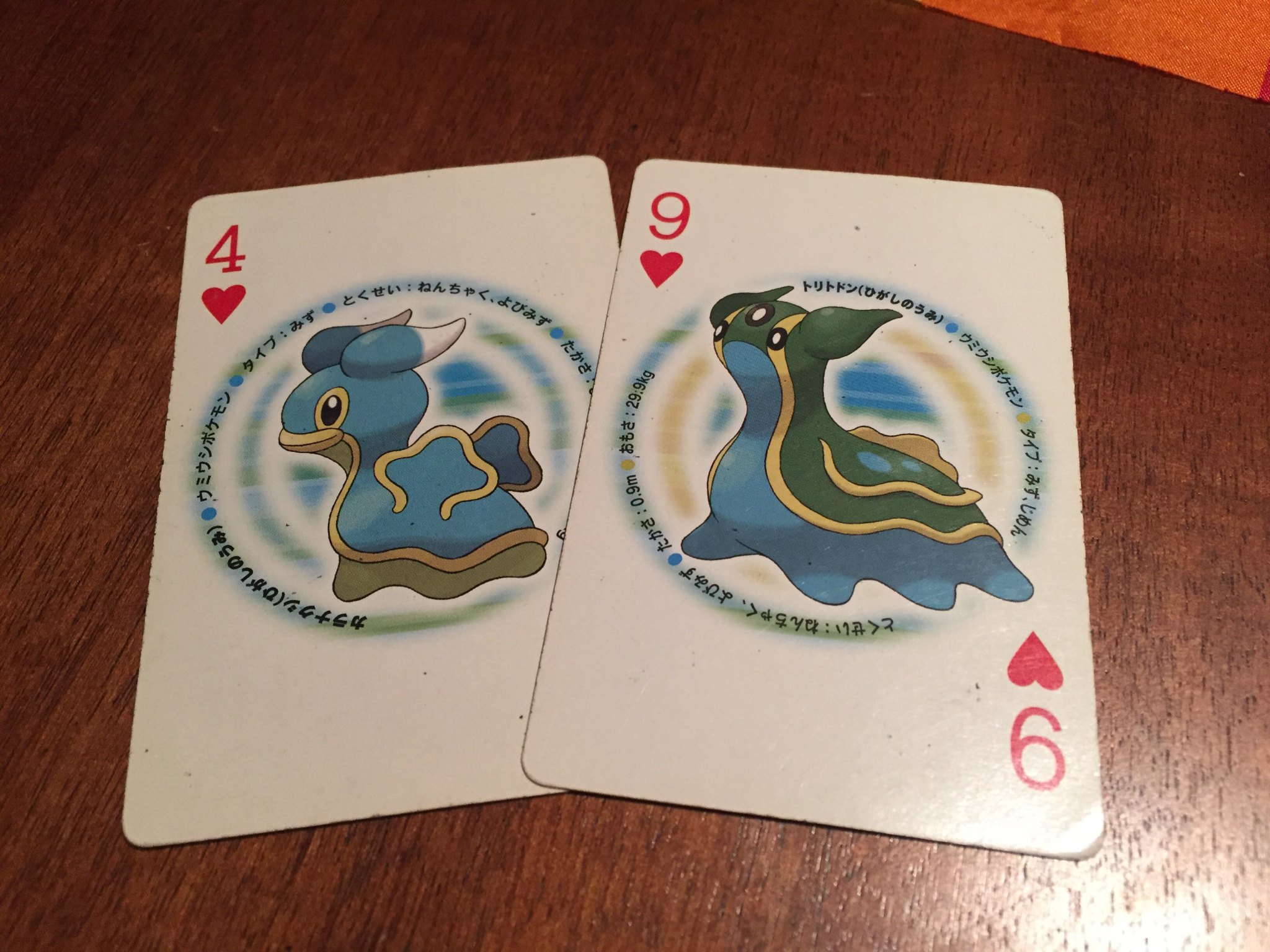 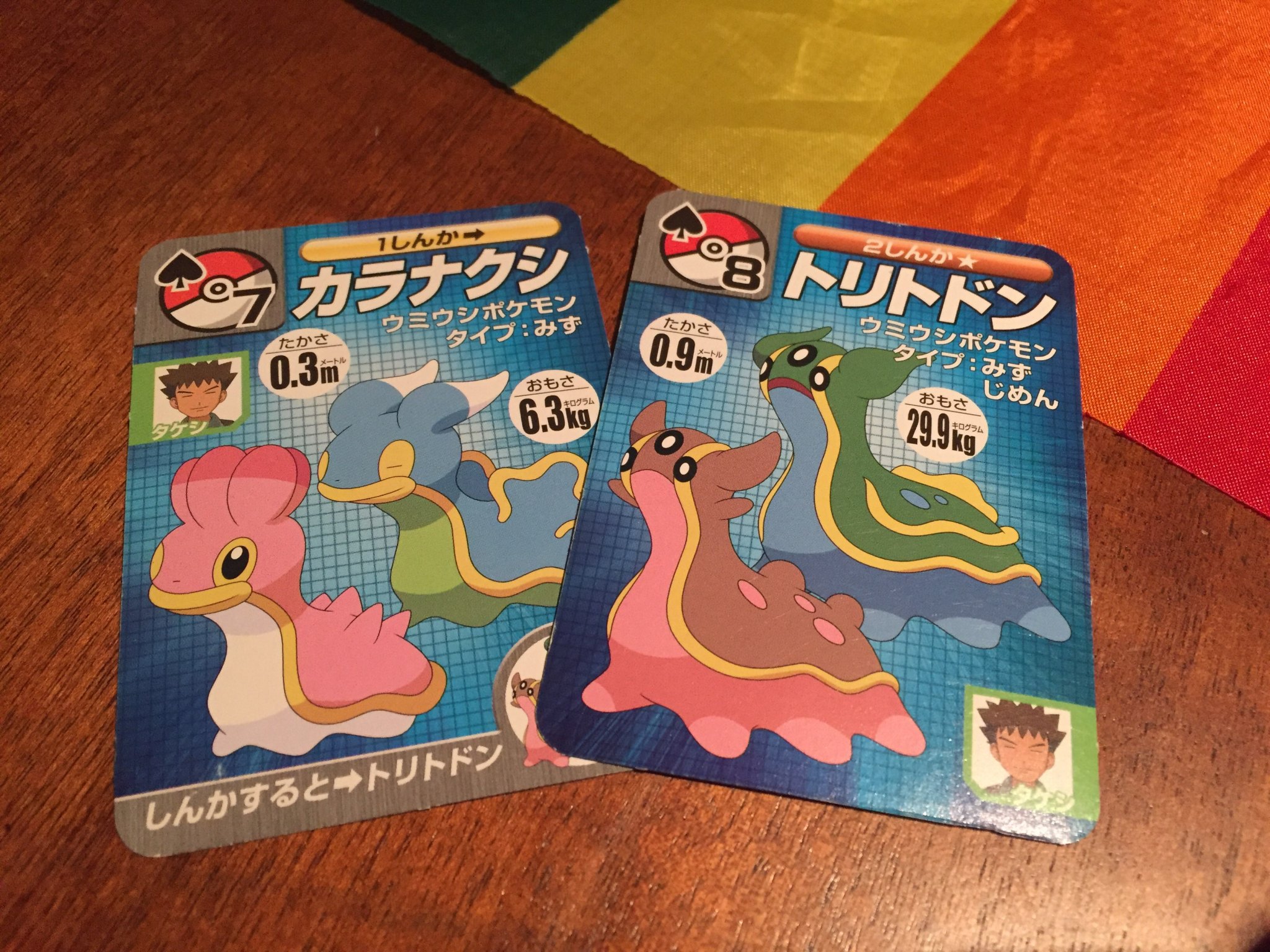 One thing that has come with collecting for a Pokemon that has more flats than plushes or figures is that I've discovered just how many more odd Pokemon things were made than I initially thought! The first set of cards here comes from a Diamond and Pearl playing card deck from back in 2007 (these specific cards are from the Diamond deck, and feature a picture of Dialga on the back.) These decks were only sold in Pokemon Centers and a few assorted toy stores in Japan, and it seems as though not many sets were produced. I have even less information about the second set - they initially just look like information cards, and the only indicator they're meant to be playing cards is the suit and number in the top left corner! They're much thinner than typical cards as well. I wonder where they originated from... 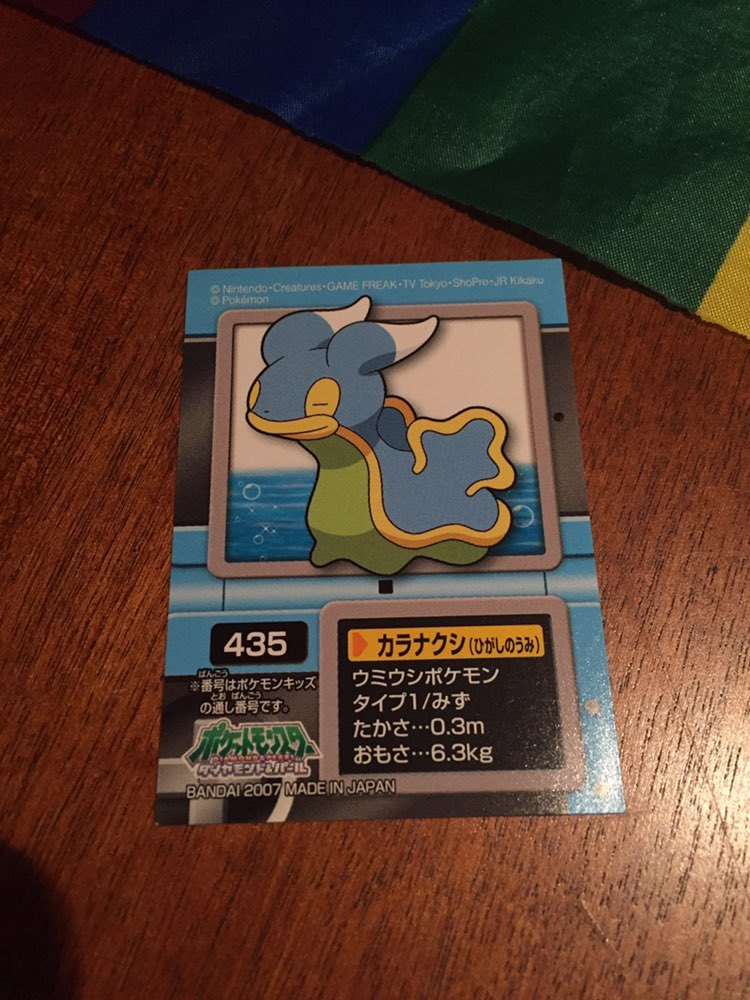 The seal that came with the East Sea Shellos Kids figures! I love how compact and collectible these seals are. i hope to one day have the box to go along with it! 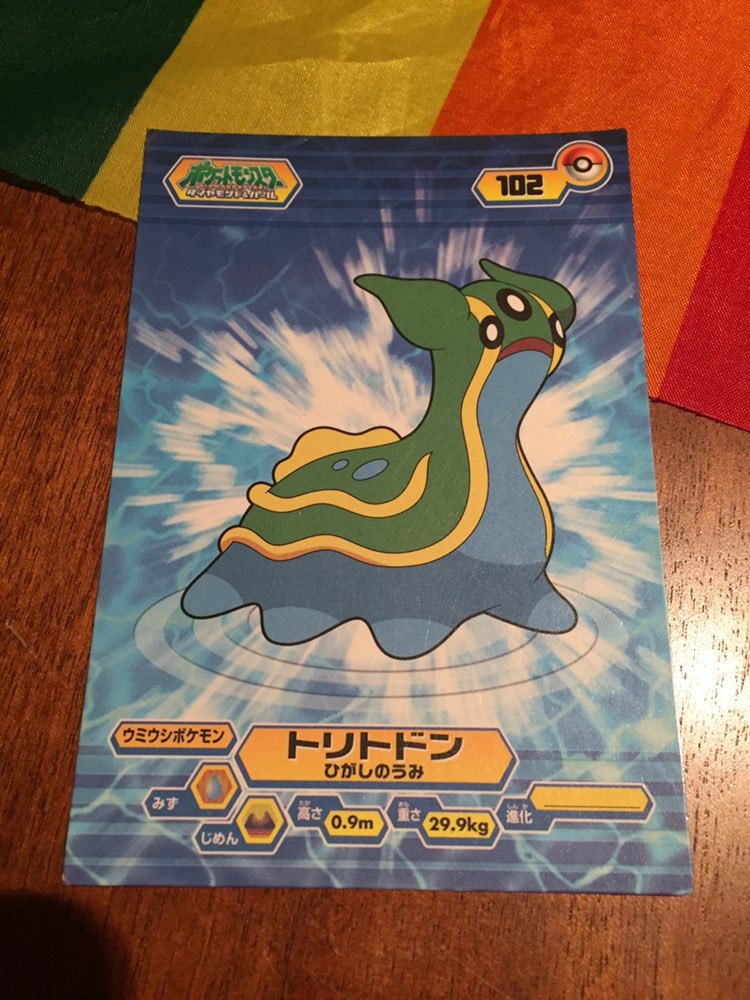 This is an oversized card that was only available in Japan! It was sold packaged with a piece of chewing gum, and each package contained random cards. These kinds of cards aren't very well known in the West - I'm so glad I could get my hands on this one! 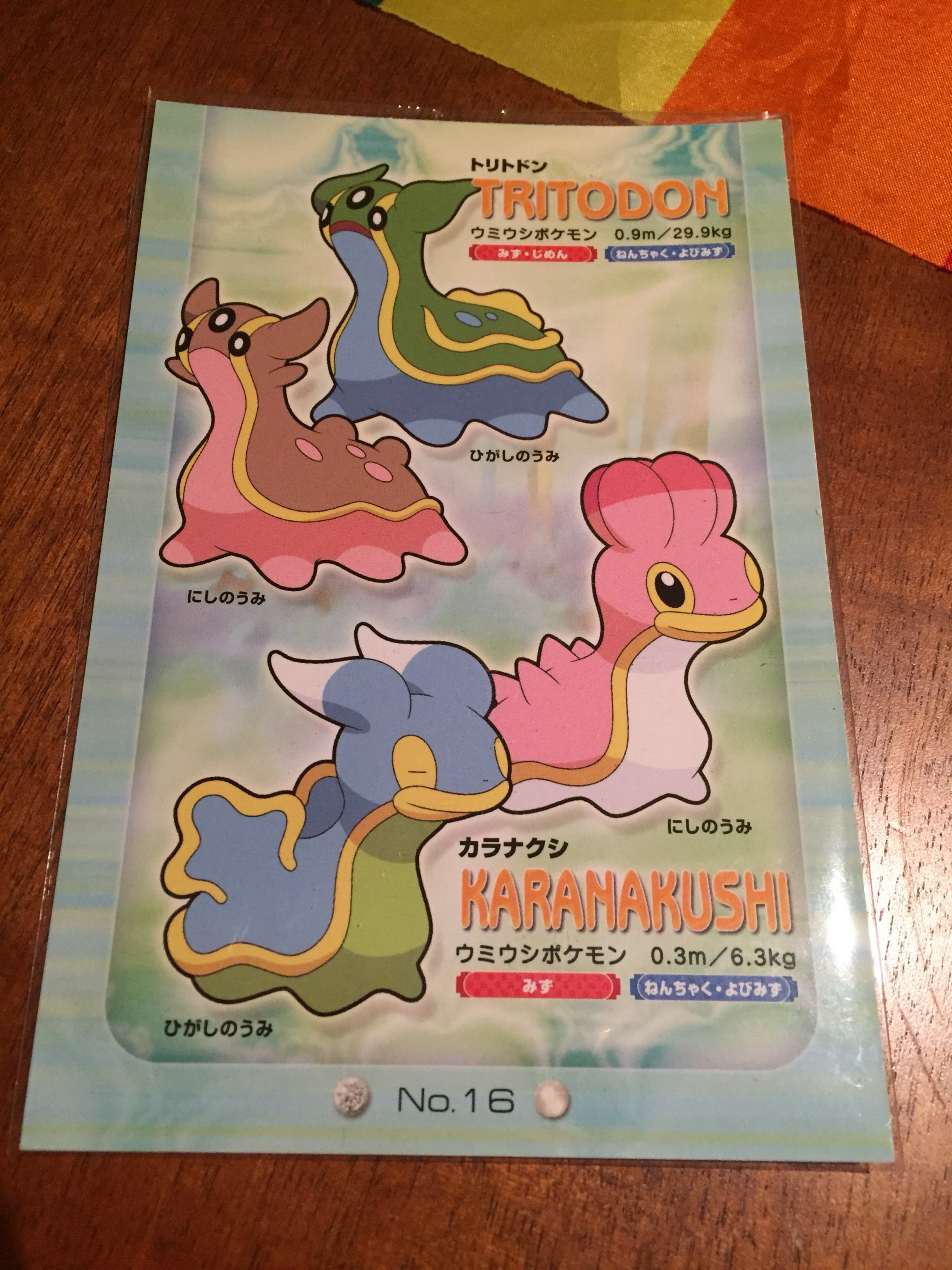 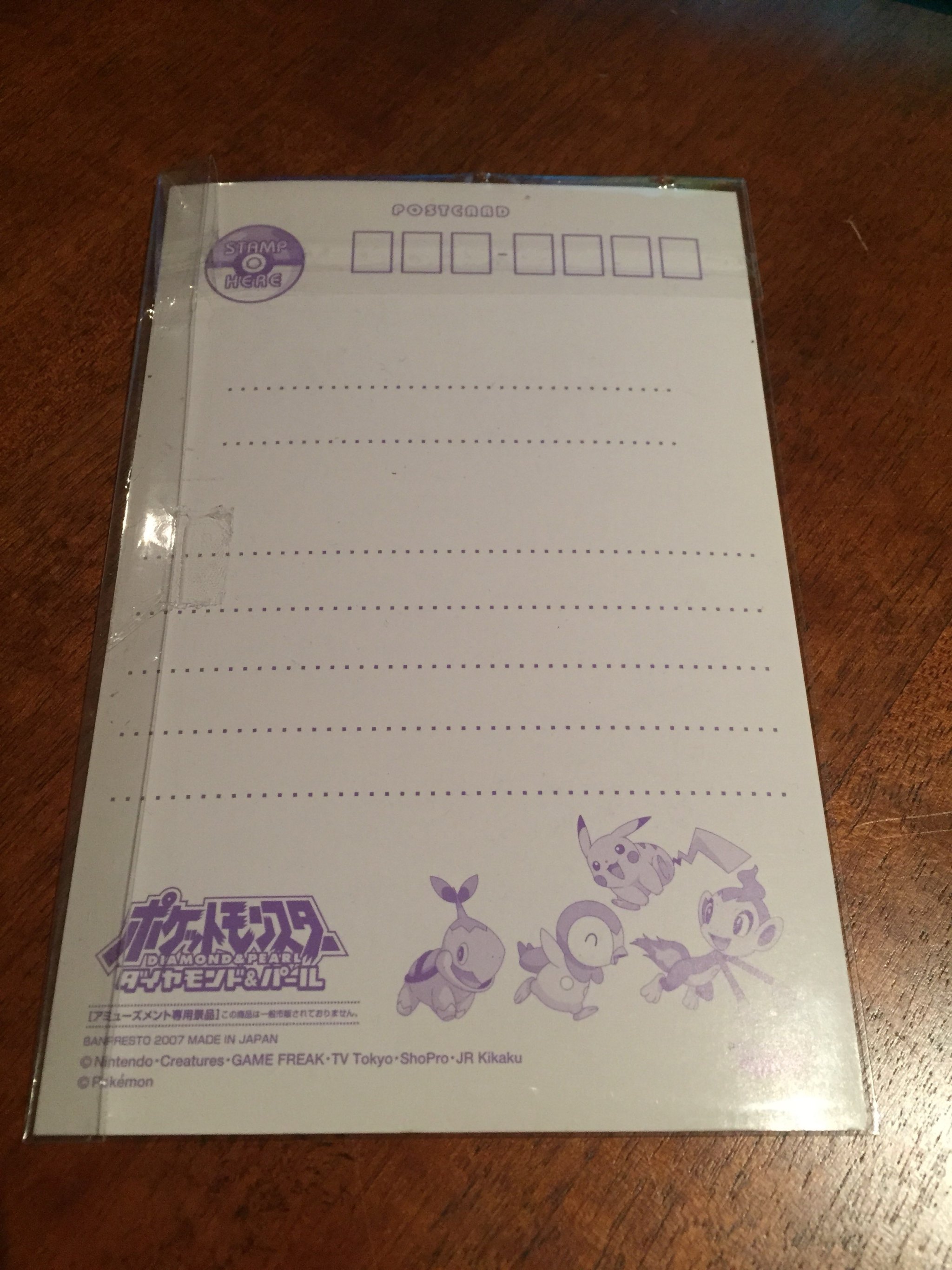 This is a strange (and rare, from what I can tell!) postcard from the Diamond and Pearl era! It's licensed by Banpresto, and is apparently number 16 in the set. There are a few more for sale from the seller I purchased mine from, but this is the only place I've ever seen these postcards for sale! 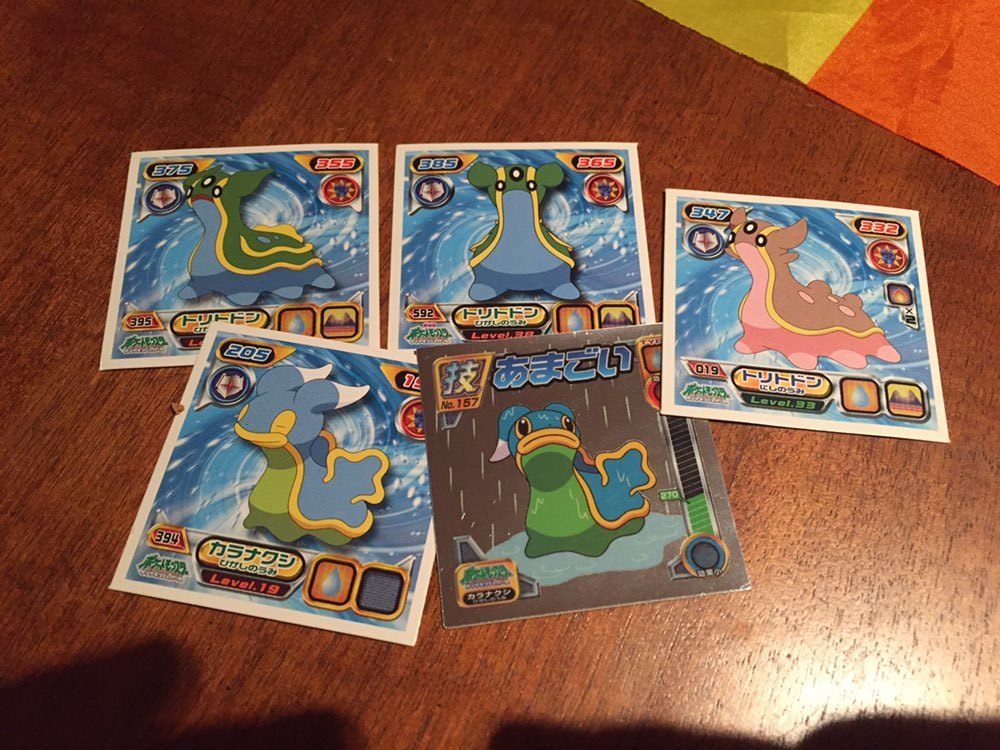 Assorted seals of both Shellos and Gastrodon! I also love just how easy to collect these are. The one with the grey background is reflective, and it features a piece of artwork I've never seen anywhere else before! 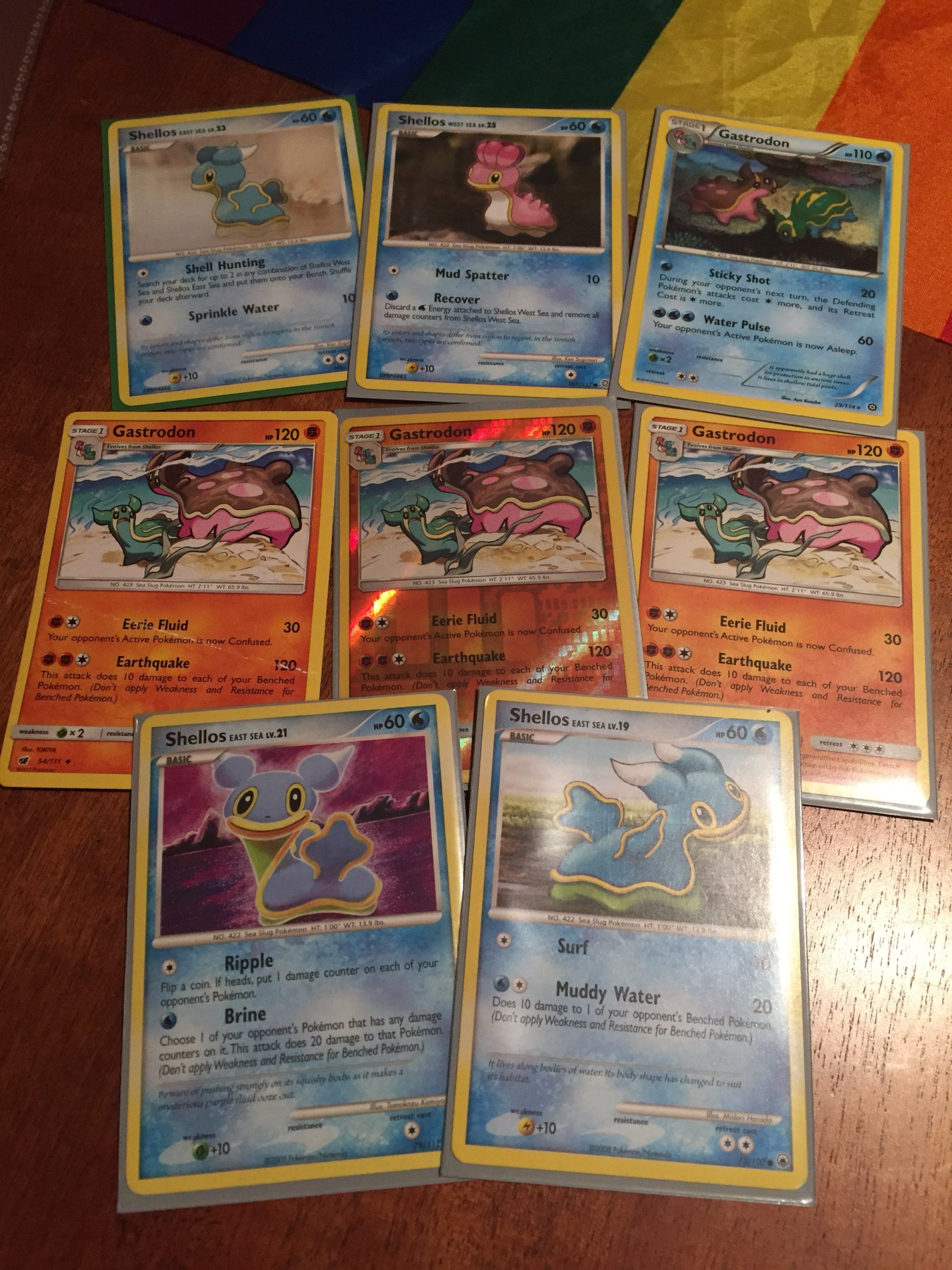 Assorted cards of both Shellos and Gastrodon! All three of the middle cards have been gifted to me by others, and I treasure all of them ;w; The one with the crease in it was given to me by my best friend's younger brother - he traded some of his cards on the playground for it to give it to me! :sob: 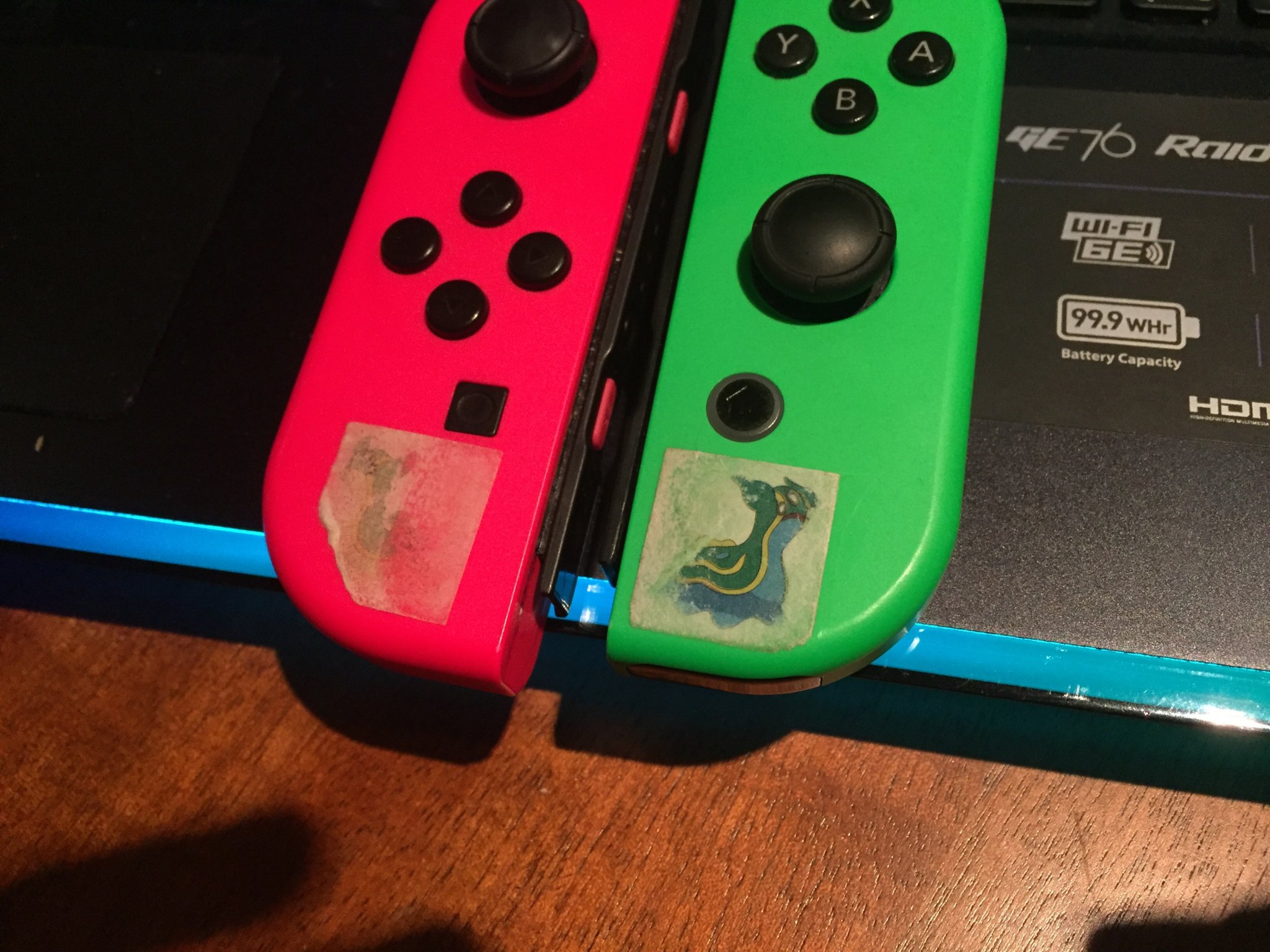 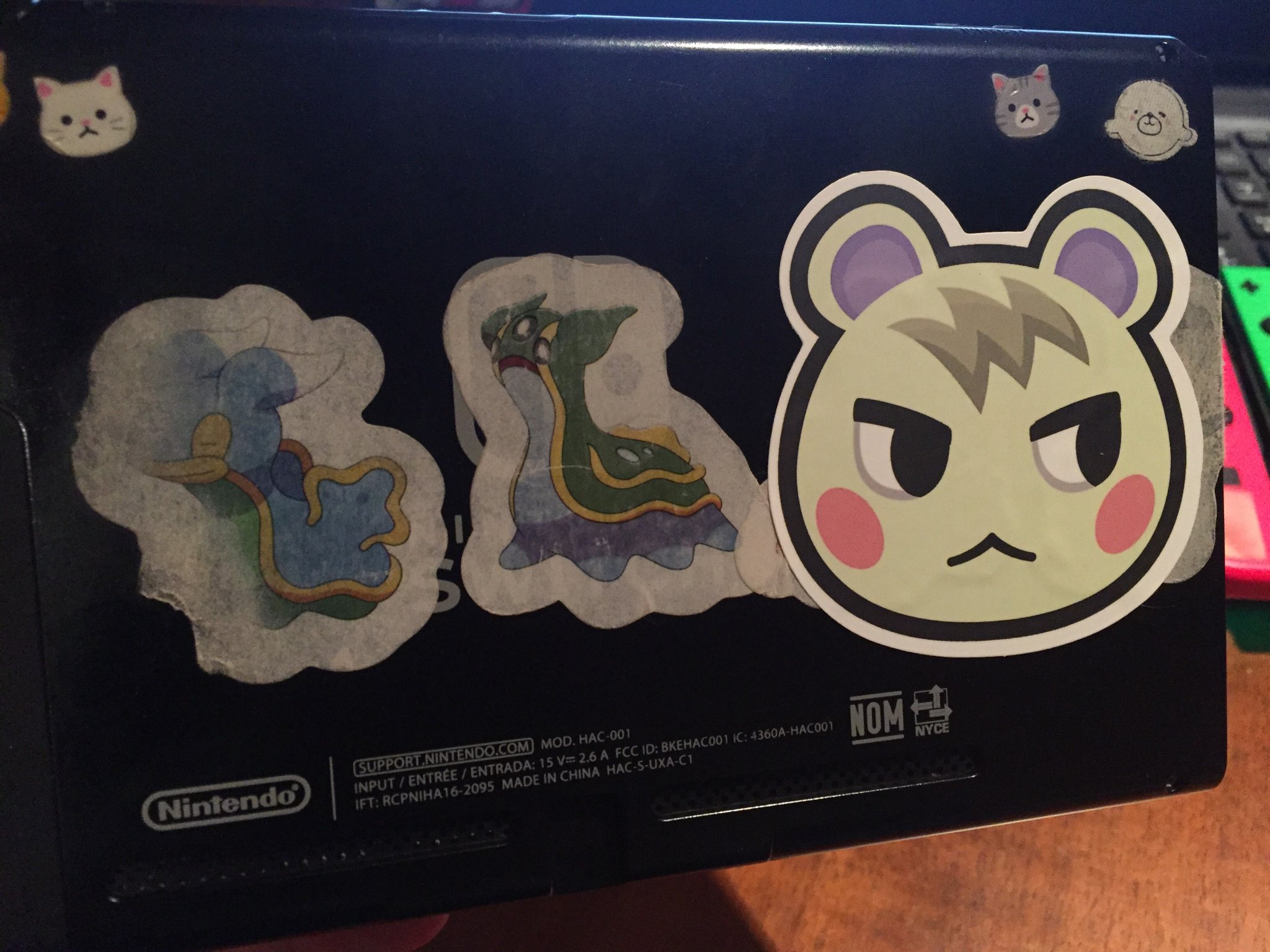 The extremely worn stickers on my Switch! There were stickers of West Sea Shellos and Gastrodon as well, but they ended up so worn and damaged from the heat of my Switch that I put Marshal's face overtop of them 💔 Strong Pokémon. Weak Pokémon. That is only the selfish perception of people. Truly skilled Trainers should try to win with the Pokémon they love best.